2/5/07: I am in heaven. How could a person not be happy surrounded by their own three Goldens, a Golden mix puppy and now an absolutely fantastic Golden senior!

Max was surrendered by his owners because of a divorce situation. He has been loved and well cared for his entire life and it shows. He is a happy boy who loves to be petted. My granddaughter's mother knew the previous owners and told me that my two-year old granddaughter loves Max. She hugs him and he is completely kid safe. He met all the dogs here and fit right in like he'd lived here forever. He is housetrained, doesn't bark other than one ruff to announce that someone is at the door, loves people, is safe with kids, gets along well with dogs and lived with a cat. Mr. Perfect. He is also playful. He will wander around the house until he finds a tennis ball or two, then come back with both of them in his mouth.

You'd also think he was closer to 5 years old than 11 (owner wasn't sure if he was 10 or 12, so we're going with 11). He runs up and down my stairs with no problem whatsoever. He doesn't jump up on you, he hasn't tried to get on the furniture and lies quietly next to the bed at night.

Max visited the vet today -- who of course were all new friends to meet. He has a hematoma in one earflap and will have surgery to insert a drain tube on Thursday. They originally thought that the hematoma was probably caused by shaking the head due to ear infections. However, his ears checked out clean with no infection. So, instead we are assuming he must have shook his head and hit his earflap on something which caused the blood in the earflap. I guess we'll never know for sure how he got it, but will get it fixed. His eyes also checked out clear with no cataracts. He weighed in at 92 pounds and could afford to lose a few. We had the vet run a senior chem panel and a fecal and will know the results in the next day or two. He is sporting a little fever which we believe may be from infection and he started some antibiotics today.

This sweet gent is move in ready, no issues and as easy as they come, plus affectionate and friendly. The epitome of the senior Golden Retriever. He could be in pictures lying on the rug by the fireplace at the cabin. If you are looking for a loving dog to share your home, look no further. 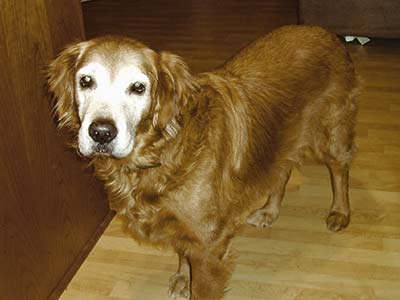 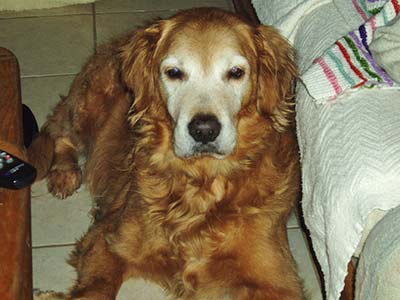