Megan is a thirteen-year-and-four-month-old purebred female Golden Retriever. She is a beautiful dark gold color with white on her senior face. She is aging quite gracefully. Megan lived in northern Minnesota before coming to RAGOM. Her owner became ill and gave her to his sister who works long hours and she surrendered Megan to RAGOM so she could live a Golden Life.

Megan is a very sweet girl who loves to snuggle and be petted. She loves everyone and wants to be best friends. Megan loves rawhide bones and toys; she carries them around all the time! Megan also loves other dogs and plays with our nine-year-old resident Basset Hound. She loves to sleep in bed with her humans and be a couch potato. Megan still likes to play; she's good at fetching, but not so good at bringing it back. At her age, she feels she has the right not to give it up! Can't blame her, can you? Megan also loves car rides.

Megan went to the vet last Tuesday and had full blood work done and got updated on all her vaccines. Some of her lab results were a little high, but consistent for her age. Megan has a very large tumor by her rectum and is scheduled for surgery on February 17th to have it removed. She does have some muscle loss and a little cloudiness in her eyes, but is in good shape for her age. 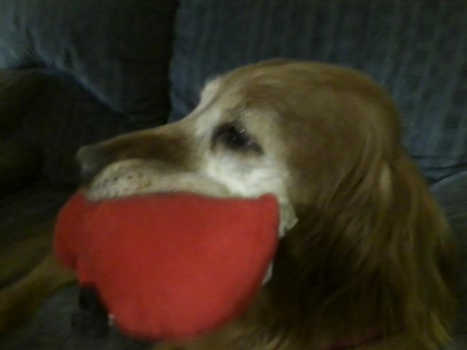 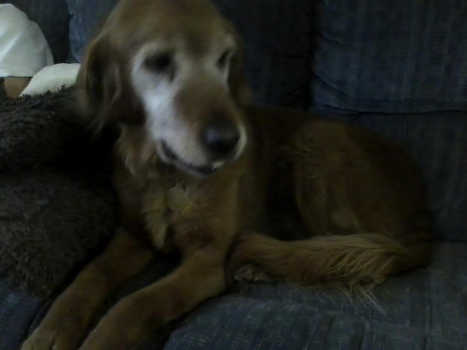