Jen Micek
"Happy Spring to Missy! She has come so far, I am so proud of her!"

Welcome Missy to RAGOMLAND!  She was 'used' as a puppy breeder in a commercial facility, living in a kennel run outside, for the first six years of her life, and suffered quietly through it all without resentment.  She arrived at our home 7 days ago, a very scared, quiet but sweet dog, who pulled herself into a corner and would not move or look at you.  She would not eat or drink, either.  During the past week, Missy has slowly progressed and also surprised us at times by her courage.

Cutter, our younger male golden, noticed the first afternoon that Missy had plopped herself in a snow hole in the backyard and wasn't moving. He went over to her and somehow convinced her to get up. He allowed her to sniff him, and then, of course, he had to have his turn sniffing, and then he lead her back to the deck. It was like he was saying, come on now--it will be alright. 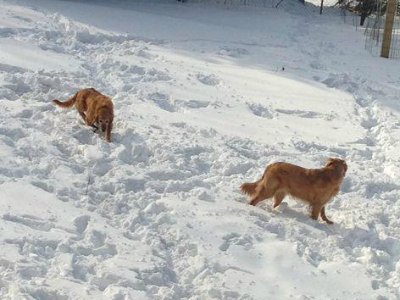 The next time she surprised us, was the second night when Foster Dad put a leash on her and she willingly went for a walk around the block with him and the other dogs.  We just about fell over, as Missy had not moved out of her spot for two days, except when she went outside, and then it was to another spot to lay motionless.  Since that time, She has begun going for two or three walks around the block daily, along with time in the backyard.A couple of days ago, as Foster Dad approached her in the backyard with the other dogs following him, she jumped up from her snow hole and ran towards them, anticipating the walk. She almost reached them and then realized what she was doing, and veered off in the other direction. She quick dug a hole in the snow and put her head face down into it like an ostrich would. Foster Dad put a leash on her and she began willingly walking with him and the other dogs as seen in the photo. It was a touching moment to see her trying so hard to join the pack. 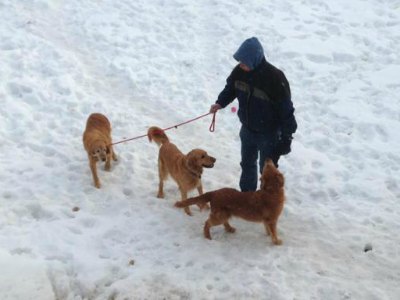 Yesterday, we took her for a walk on the Bay with our other four dogs, and a friend and his dog.  Missy actually wagged her tail as we went out onto the ice and had a fun afternoon.We gave her a bath and spend some time each day gently brushing Missy and talking to her.  She has begun to look at you, and although lying down, her head and shoulders are propped up now, rather than cowering in the corner.  Here she is after her first bath: 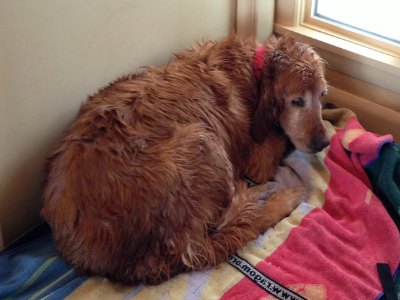 We have been gradually getting Missy to eat and drink this week.  She has built up to eating a can of hearty chicken soup with a cup of kibble at a time, when we are not looking of course; we are transitioning her to regular dog kibble.  At the Vet, she weighed in at just under 60 pounds -- it will be awhile before we can determine an appropriate weight for her; she needs to recover from not eating or drinking during the days when she moved from the commercial breeder to our home.  Missy is up to date on her vaccinations and is physically healthy in all other respects.  She does have worms and will be treated for those during the coming week.  She will have her spay surgery in about a month.  We look forward to getting to know Missy better and will keep you posted.
Sponsor Missy