Let me introduce you to Oliver.  He is a 6 year old male Golden Doodle.  He is a beautiful golden brown weighing approximately 55 pounds.  He is up to date on all vaccines and is neutered.  He LOVES to go for walks and does really well on his Gentle Leader.  He also LOVES to go for car rides.  He usually tries to ride shotgun.  But most of all, he LOVES LOVES his ball.  Actually any round object that bounces or rolls.  Oliver will throw the ball at me to get me to play.  If I am walking away from him he throws the ball at me, hitting me in the back of the legs. 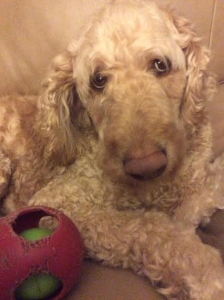 My best story of Oliver that I will remember long after he is adopted involves a treadmill, Oliver and a ball.  I recently decided I needed to get more exercise and decided to get a treadmill.  The day it was delivered I was very excited to try it out.  I got on and started it up.  Oliver, ever by my side with a ball in his mouth, decided to drop it at my feet.  Of course the ball shoots off the back and Oliver takes off after it.  Back he comes and drops it on the front of the treadmill.  I am trying to dodge the ball while I am walking, telling Oliver to stop, but he is having such a great time with his brand new toy.  This went on for about 5 minuets before I had to stop because I was laughing so hard.  Once the treadmill was turned off, he stood there for awhile with such disappointment, but true to Oliver's personality he picks up a ball and drops it.  He watches as it slooowwlllly rolls off the back.  Not nearly the fun it was before.

He was surrendered to RAGOM because his previous owner moved into a townhome and felt he needed a better living environment.  Oliver came with some habits I've been trying to change (not to criticize his original owner).  I have found Golden Doodles to be very strong in personality and attitude.  He would "growl" talk at me.  This would occur when I would say "no" to something he was doing.  It took about three weeks to break him of that.  I didn't like it and knew that any family wanting to adopt him would not like it either.  He will rarely urinate when he gets excited.  It does not happen often as I make sure he goes outside first thing in the morning and when I get home from work. He was also mounting all my other dogs.  That stopped the day he was fixed.  I was amazed that it was immediate on the day he was fixed that he stopped doing this.  He still should be introduced to other dogs with a degree of control.   Since he was 5 years old at the time he came to RAGOM he may still have memories of wanting to be in charge. 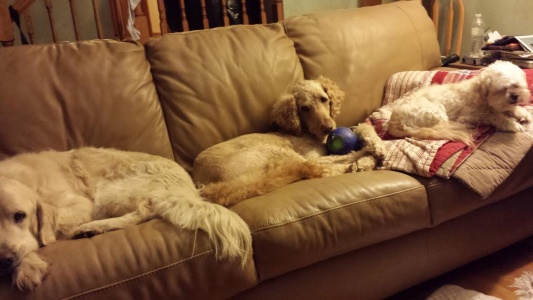 He eats socks and hair scrunchies.  He throws them back up, thankfully, as I have discovered the hard way that this is a very dangerous habit for a dog to do.  This could end up with surgery to remove the object from the stomach or intestines.  The adoptive family must be very careful with this as it only takes one time for it to turn into a serious issue.  He is also a counter surfer.  I have been working on that but honestly it is going to be an on-going issue with him.

Oliver is a cuddler and lays close on the couch or in bed.  If he is laying at my feet he is touching me.  As sweet as this sounds, it can be tricky when I am moving about the house and he literally walks so close he steps on the back of my slippers and pulls them off!

Oliver is a very happy dog.  He does a lot of smiling.  He will be a long lasting best buddy to anyone who will love him with continued positive training so that he does not regress with what he has learned. 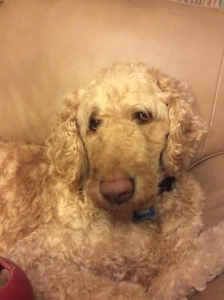 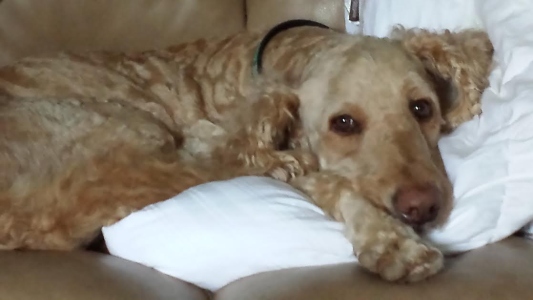