Please welcome Oliver into the RAGOM family. We’ve taken some liberties with his name as no one knows what his real name is and he can’t tell us. From the minute we saw this big guy, he was “Red” to us. Red was found as a stray and lived for several weeks in a kennel at animal control. No one came to claim him and no one stepped up to adopt him. When his time was up, RAGOM was asked to come to his rescue. So, it took a while, but the big guy finally hit the jackpot.

Several vets have examined him and they believe him to be between twelve and thirteen years old. His time as a stray and the time he spent waiting in his kennel at animal control really played havoc with his joints and muscles. He had difficulty walking around the block and just getting up and down was a major chore. He was lovingly cared for by two temporary foster families until we could get back in town from our summer vacation. This is part of the “RAGOM Village” that often comes together to rescue these beautiful animals.

Now, after several weeks of a good diet, increased exercise, two vet visits, and a regular schedule, Red is starting to show the kind of dog he really is. We are up to walks of up to 3/4 of a mile at a time. Through a combination of glucosamine, fish oil, and some carefully prescribed pain medications, he is having less trouble moving around every day. He loves to have his stomach and chest scratched and can now roll over on his back to let us know what he’d like. 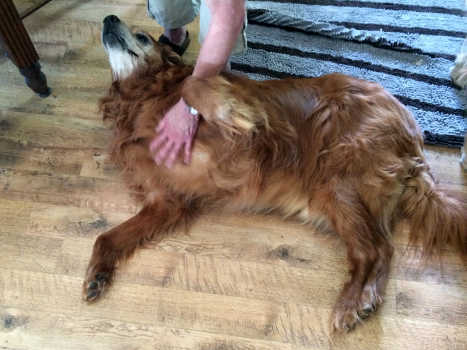 Yesterday, he was able to sit down for the first time (previously, he could only flop down from a standing position).

Red does have a number of health issues that we are addressing. The good news is that the several tumors that were found were tested and found benign. He apparently has had long-term untreated allergies that have either caused or aggravated skin problems, eye issues, and a serious ear infection. Our priority over the next several months is going to be to continue to address these issues as well as his arthritis. He is a big boy (88 lbs. of which he could stand to lose at least 10 lbs.), but we’re going to start by working on the health issues and just address the weight with exercise at this point.

We have been thrilled to find that Red is just a wonderful, loving guy – a real gentleman. He gets along with other dogs, loves cats, and is very good with kids. His tail is nearly always wagging. Because he moves slowly and has arthritis, we think that older, dog-savvy kids who can move more slowly and are not likely to stumble over him would be preferred. He has had no accidents in the house, loves his car rides (once you give him an assist to get in), and sleeps through the night. At this point, he still can’t handle more than two stair steps, so a one-level house or apartment would be required.

We’re still learning more about Oliver/Red every day and we’ll keep you updated as to how things are going for this wonderful guy. Because our energies are focused on clearing up the medical issues, we won’t be actively looking for Red’s adoptive family just yet. Stay tuned, there’s a lot more to come! 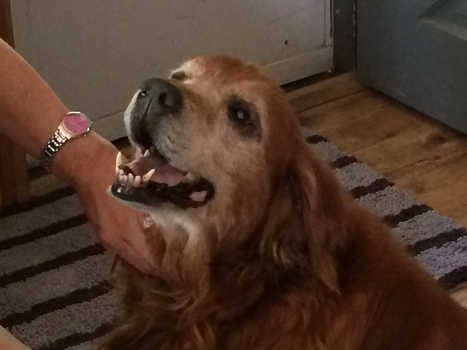