This sweet boy has been through a lot of changes lately, but he is still just a wiggly bundle of love. He is 1.5 years old, weighs 75 pounds, and has double that in love and enthusiasm. He was very sadly surrendered by a loving family. The dad is in the Air Force and they were being transferred to a base that has a one-dog limit. Since Oscar had an older sister, she is making the move and Oscar needs a new home. The family thought that since he was younger, the change would be easier on him than the older dog.

That was just the start of his journey. He was surrendered to a no-kill shelter down south, then transferred to the Golden Valley Humane society, and then transferred to the Coon Rapids Humane society where he was neutered. The funny thing is that his family was from Minnesota originally, so his "grandmother" lives here. Although she would have loved to take him, her two resident dogs are not open to a new brother. She found out about RAGOM, adopted him from Coon Rapids, and turned him over to us (after a few tears). So you can see that this boy has been bounced around and really needs to find his forever home!

He is great with kids (his family had a 10-year-old and a 3-year-old). He likes other dogs and would love to play with them. My resident dogs are both old ladies, and have not been much fun in that department. He is crate trained, comes enthusiastically when called, shakes paws, and lies down with a little encouragement. He was just neutered on Friday. The only problem I have had with him at my house is that he has done some marking inside. I am hoping that as he gets farther from the surgery that will end. His family said that he had not done that in their house. My house has LOTS of dog smells from all of the fosters that I have had, so I am sure that was a trigger for him. He needs to be trustworthy in order to get free roam of the house, so we will really be working on this.

Oscar does not like vets with vet equipment in their hands. He is friendly to vets who give him treats, but if they try to do anything medical to him, he is not happy. I don't know what has caused this fear in him, but he will need patient work on this.

He pulls like a freight train when he is on a leash with a regular collar. Yesterday, I fitted him with a Gentle Leader and he was MUCH, MUCH better. I think he will be a great dog to walk or run with once he gets a little more training. He has a really cute curly tail which I will try to post a picture of. This boy would love a family with children who would share his enthusiasm for life and love. 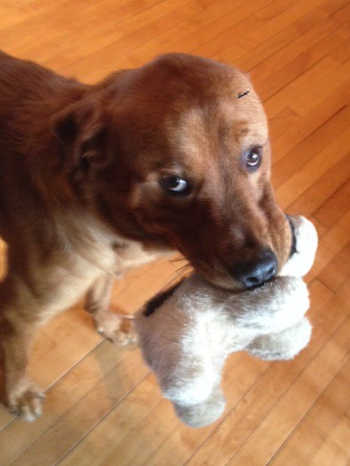