Ranger is a sweet 7-month-old golden mix who will make his future family very happy. He entered RAGOM at the end of April 2016 when he was brought to a shelter with a broken rear leg. After a week of being casted, it was determined that he needed a plate and screws to help his leg mend. He is recovering wonderfully here with us in Cedar Rapids, IA and is as playful and cute as ever! 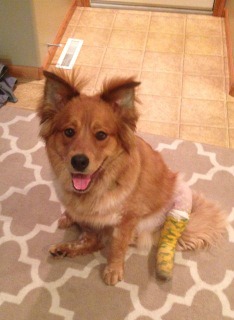 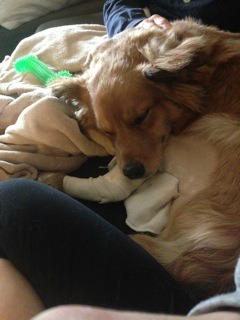 He loves to cuddle and will follow you around like a ‘velcro’ dog. He likes to be near (or on) you at all times, even when he is chewing his antler. He has been chewing appropriately – the only time he has been destructive was during his first couple transfers when he chewed through his leashes. 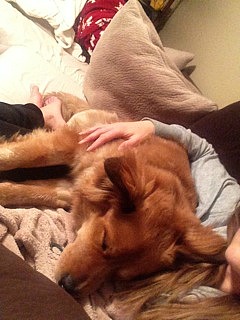 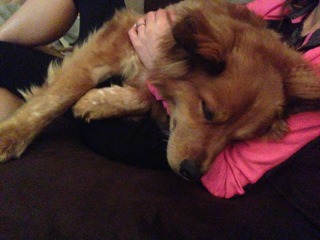 He still occasionally does gentle, puppy mouthing on hands, but responds well when corrected. Ranger is very eager to please! He can sit and shake and we have been working on ‘wait’ when his food is set down or when a door is opened. He is housebroken and knows he is supposed to ‘go’ right away when taken outside. He has the most beautiful light brown eyes and his adorable ears stick up like a fox. He perks up every time he sees you, even if you are just entering from another room. 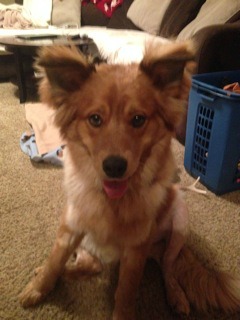 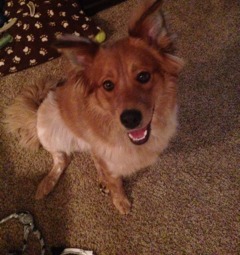 He has a thick, fluffy coat with a bushy tail. He is soft and doesn’t mind being brushed. He is a light golden color with white undercoat and some white spots on his legs. His legs are short and he weighs 55 lbs at his vet appointment this week. Ranger loves treats and will watch you very closely when you have food. He takes his treats gently from your hand and so far hasn’t shown food aggression. He enjoys Kongs with peanut butter and kicking his tennis ball around with his paws. He has been known to toss his toys up in the air and then chase after them! He still has a lot of cute puppy behaviors. Ranger barks for a while when left alone in a kennel. It takes him a while to calm down so today we let him have free roam of the house while we were at work and he did wonderfully. He hasn’t barked at all while we have been home. 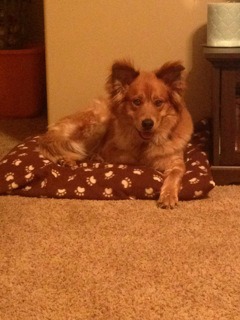 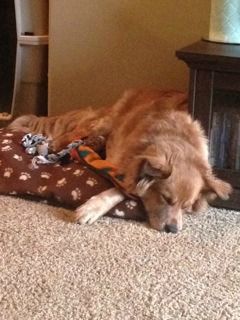 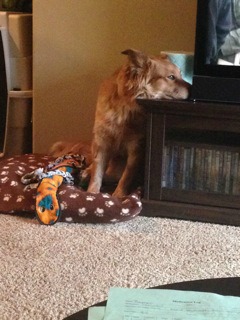 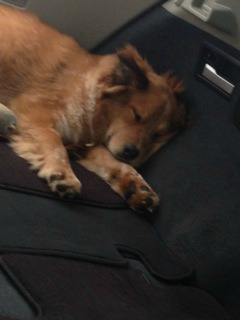 He sleeps in our room on the floor at night. Ranger’s first temp foster said he loved the resident dog – he would follow him everywhere and sniff everything he sniffed! He would probably love to have another dog in the household to play with, although not required. The shelter told us he passed the cat test – so this would be a possibility too. He has been very friendly with neighbor kids. Ranger is neutered, microchipped, up to date on vaccinations (final booster next week), and negative for heartworm. 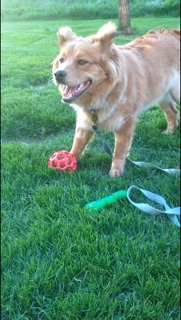