9/21/05: Riley has returned to RAGOM after an unsuccessful adoption. Riley is high energy and strong-minded and therefore requires someone who will keep up with Riley's training/be consistent in correcting Riley when he breaks the rules. Riley is extremely treat oriented - and his skinny fur butt will plop down so hard in his hurry to sit that I'm afraid he will bruise his bones; however, we are working on training without treat motivation. We were told Riley has seizures and was put on phenobarbital. However, the reported seizures appear to consist only of mouth chattering - not a fast chatter, but as though her were chewing something. Riley remains aware and active and still responds to commands (especially treats) while having the "chattering" episodes. These episodes last about 15-30 seconds. Riley's episodes have decreased significantly and now rarely occur as he has settled into his foster home. Riley has been staying in his crate while his people are at work (about 10 hours) but typically gets a stretch break during the lunch hour. Riley still responds to "come" and knows "sit" and is starting to know "lay down". Riley likes to fetch, catch Frisbees and is fast and agile. Riley sleeps on the floor alongside the bed. More to come as Riley settles in. 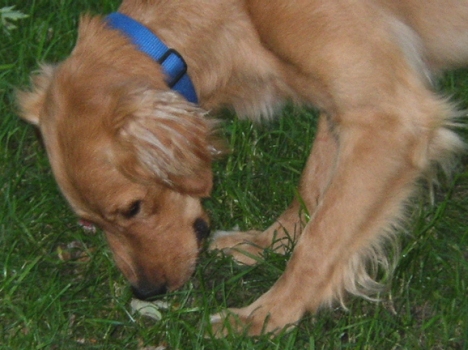 Riley stops to smell the roses - or leaves
Sponsor Riley