Rusty 12-188 is a 9-1/2 year old purebred Golden Retriever. He is wonderful with other dogs, cats and kids. So far, he has shown no aggression. He met the two residents with absolutely no issues. In his surrendering home, he was an indoor dog that had run of the house and is housetrained. He likes car rides and rode wonderfully during the hour-plus transport to his foster home in St. Paul. He is not destructive, does not have separation anxiety, reportedly will pant during storms. He has lived with Cinnamon 12-189 for 9 years and it would be great if they could stay together in their adoptive home. He was surrendered because the owner moved to a home that does not allow animals.

The first order of business upon arrival was a bath. Rusty enjoyed it and he loved the towel rubbing at the end. He dried rather quickly. During his bath, I didn't find any lumps or bumps, but he certainly could afford to lose a couple of pounds. More on his weight after our vet visit this week. He has a shorter wavy coat and is medium red in color. He had furry feet, I've trimmed the fur on his front feet, but he's unwilling to let me trim his nails. He pulls away when I take his feet only when I'm holding a scissors or a nail trimmer. We'll try again once he's more comfortable here.

Neither dog ate dinner last night. They arrived after 4 p.m. so it was only a couple of hours later that I tried to feed them. I used the food they came with but they both just walked away. This morning, he ate breakfast with gusto and would have eaten Cinnamon's if I hadn't stopped him. The surrendering owners used to free-feed these dogs so meal time will take some getting used to.

On Sunday, I left them home for 4 hours with free roam of the main floor. Came home and it took a second for anyone to greet me. Nothing had been moved...obviously they are fine home alone.

It has become apparent over the last 24-hours that Rusty and Cinnamon were loved pets throughout their lives. It doesn't seem as if they've had any formal training, but they are well behaved pets. They stick together and I would love to place them together. I'll update more later in the week. 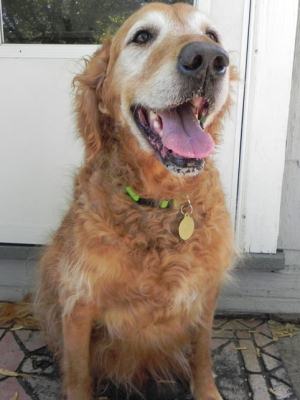 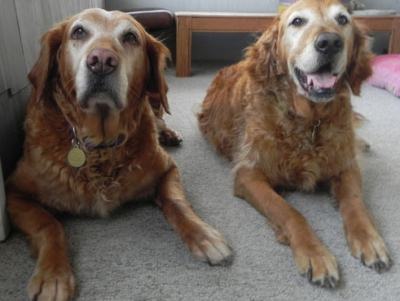 Wouldn't it be great if we were adopted together!!!