Rusty is a beautiful boy who most of all loves affection. Within his first hour at my home, he rolled onto his back for a belly rub! Sometimes he is overcome with excitement and is quick to jump up on you and tries to kiss you, so he will need some help to learn better manners. Rusty is tall and strong and would do best in a home with children 10 or older. He loves to play fetch, can catch a Frisbee in his mouth and has a need for high activity. He loves walks, running, sprinting, and swimming. When he doesn't get enough excercise, he becomes more hyper and may start tearing or shaking his dog toys. He's also a good traveller and loves to ride in the car.

Rusty has had level 1 obedience training and will sit, lie down, and stay on command. (For a short while, anyway.) He also responds to the word "off" when he attempts to jump on you if repeated enough times. He wants very much to please and if he wants to go outside, he comes and puts his head in your lap and won't leave you alone until you take him out.

Rusty has shown some anxiety and will pant heavily and bark when he sees me outside mowing the lawn, but then quiets down once I'm out of sight. It would be best if Rusty could be in a home where he is not left alone all day, although he has done very well when left alone for 5 hours. Rusty is not interested in going in a crate, and has had free roam of the house when I'm gone. He's house trained and has not disturbed anything in the house, but rumor has it that he will go after food if left on the counter! He's afraid of fireworks and thunderstorms, however, and wants to hide and pants heavily. A Thundershirt seems to help, but he wants to be near you and paces nervously.

Rusty would do well in a home where he can get attention from several people. He's very loveable and gentle when others approach him while on leash. However, Rusty has a big bark and is exciteable whenever anyone comes to the door, so it's necessary to call him back and hold his collar as people enter the house. A baby gate does not adequately hold him back, and one time, he growled at someone who came into the house and he was behind a baby gate.

Rusty appears to be a very bright dog who will thrive in a loving home where there is lots of attention and routine. One could not ask for a more wonderful canine companion than Rusty! Did I mention that he prefers sleeping on the bed? 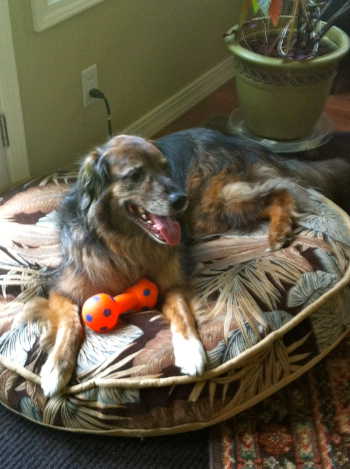