Welcome Sam back to RAGOM. Sam spent the first years of his life in an outdoor kennel with his buddy, Golden. Sam and Golden came into RAGOM together. They were adopted out separately. Sam transitioned into inside life. However, one issue arose, which resulted in his return to RAGOM. He didn’t like to be left alone. We now know he has some eye sight issues. We saw a specialist today and learned that Sam has cataracts in both eyes and retinal degeneration. It is unlikely that the cataracts will get worse. If they do, he may need eye drops to block the inflammation at some point. Surgery is not recommended. As to the retinal degeneration, it starts at around five years of age and is indicated by reduced vision in dim light, which Sam has. There is no treatment specific for retinal degeneration in dogs. Vitamin supplements are used to slow the progression. I started Sam on Visibili-T, and the specialist confirmed that I should continue.

Based on this information, it makes sense that Sam relies on his resident dog and humans. What I have learned is that Sam is great with his humans and new human introductions. He is also good with a few dogs at a time, however a pack of dogs rushing at him is overwhelming. So, he is not a good candidate for a dog park or dog kennel situation. Sam can also become frustrated when he is left home alone. So, he will need a companion resident dog. It is also preferable if he has humans that work from home, so he is not left alone for extended periods of time. Sam dislikes kennels, which is understandable due to his eye sight issues. However, Sam is gate respecting, so I gate him in the entry way with our resident dog when I leave for short periods of time.

Fortunately, Sam loves to go with me and waits patiently in my vehicle with the resident dog while I do errands. He also prefers to watch people, instead of being parked in a quiet area.

Sam is respectful of my time, when I work from home. He either plays independently, plays with the resident dog or sleeps quietly. Sam will need a fenced yard to run in. He also really enjoys his morning and evening walks before settling down for the day or evening. 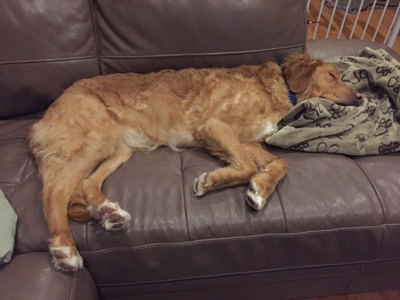