Mary and Carl
"Wishing you the best!!

Please welcome Mr. Schroeder to RAGOM! Schroeder is a 10 year old neutered male Golden Retriever that came from a shelter in Minnesota. He weighed 63 pounds at his vet visit, but should be closer to 70 or 75 pounds. He is just the nicest boy! I think that they realize how good things are when they become a member of the RAGOM family. Schroeder definitely seems thankful for a loving foster family, a soft place in a home to rest his head, and all the care and attention he could ever dream of getting.

You may notice that Schroeder is sporting a funny haircut. He had severe matting on his rear legs, tail, belly, chest, and behind his ears, and the kindest thing for us to do was to shave them off. Since they were so tight to his skin, he did have sores on his skin and he was very itchy. A few soothing baths later, and he was much more comfortable! Schroeder did great for all of his grooming – the shaving, brushing, nail trim, and even cleaning his ears. He is a very easy going dog! 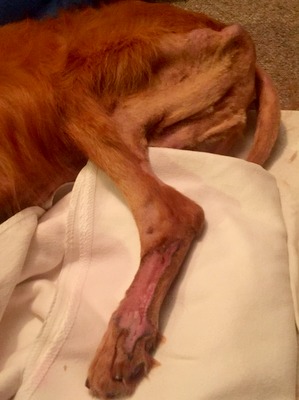 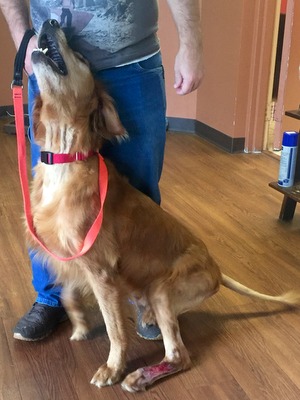 Last fall, Schroeder was believed to have been hit by a car. While he didn’t suffer any broken bones, he did sustain nerve damage to his rear left leg. He also had a degloving injury to his foot on that same leg. We are unsure of what treatment he got to care for his injuries, but we do know that his family chose to surrender him to the shelter in early August, almost a year after he was injured. The shelter initially reported that he had a mass on his leg, but our RAGOM vet does not believe this is the case. We did xrays and there is no bone injury or evidence of any tendon injury or mass on xray, and there does not appear to be any masses on his leg. His wound is from the degloving injury and self-trauma. Because he did not wear an e-collar or have the wound covered, Schroeder continued to lick and re-open his leg wound, which caused it to not heal since the injury occurred last fall. Schroeder does have minimal movement in his leg, but he doesn’t use it to walk and most of the time he holds it up. As you can see in the pictures, he has no muscle mass on his injured leg. Due to this type of injury and his non-healing wound on that leg, our RAGOM vet is recommending that his leg be amputated. The good news is that his other leg is strong and healthy, his hips are excellent, and he’s already used to using just three legs. We think he will adjust very well! His surgery is scheduled for 9/26. In the meantime, we are working to get a little more weight on him and get him as healthy as we can to help him get through surgery as easily as possible. We are also doing daily bandage changes for his wound, and it already looks a lot better. If we bandage it, he leaves it alone. Sometimes I’ll leave the bandage off so it can get some air, and we have to use the e-collar, because he wants to start licking at it right away. 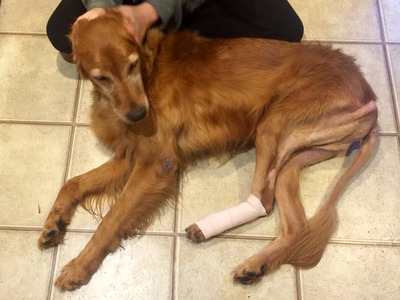 Schroeder did come in with a snotty nose that quickly developed into a deep cough and the vet diagnosed him with kennel cough. He started to recover as soon as he was placed on antibiotics. It’s not uncommon for dogs in a shelter situation to be exposed to kennel cough, so getting him in a home environment was critical for his health. He is almost completely back to normal from his kennel cough and we can tell he feels a lot better. At his vet visit, he did have a bad yeast infection in both ears so we started him on an ear medication. They are completely healed now and we think he is a lot more comfortable! His bloodwork showed that he was slightly anemic and had a high white count, which could be contributed to the infection and wound on his leg. We will recheck it before he has his surgery. Otherwise, all of his internal organs are within normal limits and he’s very healthy for his age! The vet wants him to gain a little bit more weight, and Schroeder loves all the delicious, high quality kibble! His heartworm test was negative, as was his fecal. Yay! He is also up to date on vaccinations. With everything he had going on, FM forgot to have them scan for a microchip, and so we will have that done at the next visit and have one inserted if he doesn’t already have one. 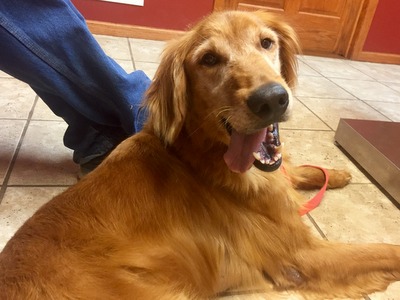 Schroeder is completely house trained and has been a very good houseguest. At night, he sleeps baby gated in our bedroom with our two dogs and our other foster, Lambo 16-135, and he does great. He’s more than happy to sleep in and he is quiet all night. We do crate him while we are gone just because he does have a fondness for anything stuffed. Usually it’s just toys, but he has gotten one of the stuffed dog beds at night and destuffed the whole thing! But honestly, that is his only flaw. And what dog doesn’t like to destuff toys?! We think he may not have had many toys in the past, because he really loves to chew on all of the dog toys. He will ruin anything soft or stuffed, but he will also spend hours chewing on a nylabones or kong. Schroder doesn’t bark too much (unlike our resident dogs!) and he’s just an overall wonderful companion! He attaches quickly to people and just wants someone to love him and give him attention. We do feed him in his crate since we have several dogs eating at once. The first week he did get growly whenever a dog or cat came near the kennel while he was eating, but now he is fine with it. These behaviors are not abnormal at first, as a foster needs time to settle in and know that they are in a safe environment and that they don’t have to fight for food. Schroeder gets along fabulously with cats, and does great with our dogs. He has a little less tolerance for our 12 week old foster puppy, but really, we can’t blame him there! He would do best in a home without a small yappy, in your face type of dog. Ideally, he would love to be an only dog or live with another mellow dog. He’s not much into playing with the other dogs and would much rather get attention from his people than from other dogs. Schroeder does get along well with kids, too. We have a 12 year old and an 8 year old, and he does fine with both. We think he would do best in a home with a little less commotion, so we are suggesting a home with kids over the age of 10 or so, but this is negotiable. We do not think a home with very young kids would be a good fit for him. 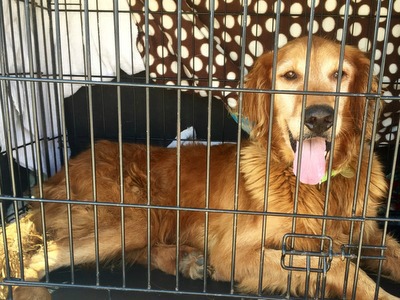 Do you think Schroeder might be a good fit for your family? Contact your placement advisor today! Although he won’t be able to be adopted until after his surgery and he has recovered a bit, we can still get the process started and discuss him further! Don’t miss out on this wonderful senior boy. He is as sweet as they come!