Simon is a 3-year-old Golden/Lab/Greyhound mix. He was adopted from a shelter when he was 8 weeks old and sadly returned 3 years later when his family was moving and couldn’t take him with them. Simon was very confused with all the changes in his life and was becoming nervous at the shelter, so he was surrendered to RAGOM. He was with a temporary foster for a week and then came to live with us. He has settled in very quickly and is doing great. He is neutered, up-to-date on shots, and heartworm negative. He weighs 64 pounds, but is a little on the thin side, so we are working on putting some weight on him. Simon is house-trained and has had no accidents - he will whine or go to the door when he needs to go out. He loves walks, but does pull like a freight train on the normal martingale collar. He does much better with the Gentle Leader. He doesn’t love it and shakes his head and paws at it at first to try to get it off, but after a few minutes, he gets used to it and walks just fine.

Simon has a lot of energy and loves to play fetch. He would play fetch all day if we let him! He is great at it too - he sprints off after the ball and brings it right back and drops it at our feet to throw again. In the house, he does a great job of entertaining himself with toys when we are up doing other things, but likes to bring the toys and put them in our laps for us to throw for him if we sit down to watch TV. He does tend to destuff softer toys, so we have put those up and left out only the balls and more tough toys for him to play with. Simon gets along very well with our male almost-two-year-old resident Golden. They play wrestle and tug-of-war with toys constantly. We haven’t seen any resource guarding; they trade off toys and make sure to check each other’s food bowls when they are done eating to make sure neither missed anything. Simon has had training; he knows several commands like sit, down, stay, drop it, leave it, out, back, and shake. He does tend to jump up when he is excited, but we are working on that. He is very smart and would do great in obedience classes or agility. He would also make a great running partner. 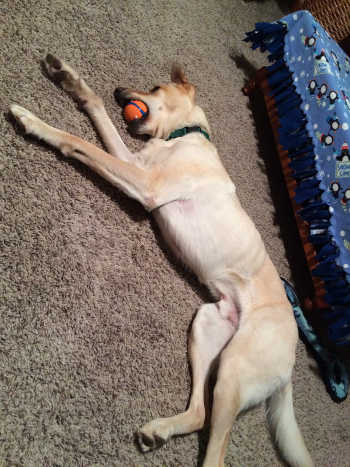 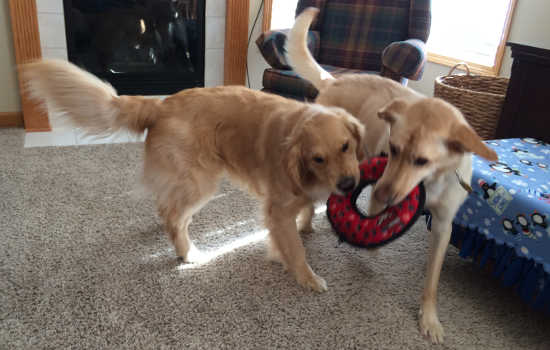 Simon does fine kenneled for up to a full workday; he would probably be fine with free roam as long as trash and other things are picked up. He hasn’t gotten into anything here and has not tried to counter-surf for food (he did to get a ball off the table). but he is very curious about the trash cans. At night, he has free roam of our bedroom and usually ends up sleeping on the armchair all night. He does settle down and loves to cuddle; he leans into us for pets and attention and climbs up on the couch so he can lay right by us.

In his previous home, Simon lived with children ranging in age from 3-16 years old, and he did very well with our younger neighbor that he met, so at this time, we would say he would be fine with children of all ages, as long as parents understand that he is energetic and a smaller child could get knocked down when he gets excited. Simon does not need a fenced-in yard; he has excellent recall and always comes running when we call his name. He is reportedly good with cats also, but we have not tested him yet. He could live with another dog (preferably a playful dog) or he could be an only dog, as long as his family is committed to getting him enough exercise. He would love a walk each day, as well as somewhere he can run around and play fetch. Let your placement advisor know if you would like to meet Simon! 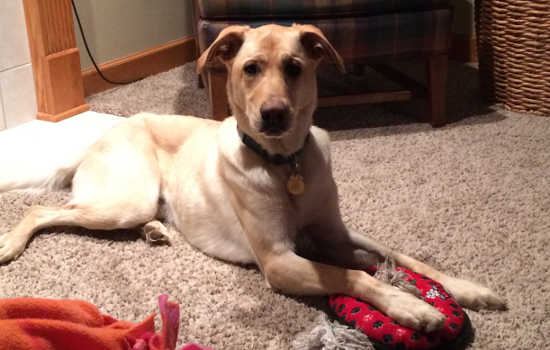