Stryker is an 8 year old Golden/Lab mix. He gets along beautifully with my resident dog Cooper, an English Setter and has no agression issues. Stryker was a stray so he is a little obsessed with food so I monitor supper time. I think once he puts on a little more weight and realizes he's a RAGOM boy forever and will never have to worry about food, he will settle down.

He gives kisses, loves hugs, and is 'oh so tolerant' of my neighbors 7 month old chocolate lab who pulls on his ears and wants to wrestle, constantly! He's a very gentle soul.

He has a few issues that we are working on. He Is a counter surfer (not surprising considering his food issue) and is very nosy when it comes to garbage and groceries. I've learned to keep groceries out of reach and have an enclosed garbage can.

Stryker is actually a very good walking companion, just pulls a little when he sees a great place to mark his territory! We're working on that as well. We have been on several 3 mile walks and you would never know he is 8 years old. He has a lot of energy so daily walks or a good long game of fetch (which he also loves and gets very excited about) would be highly beneficial. 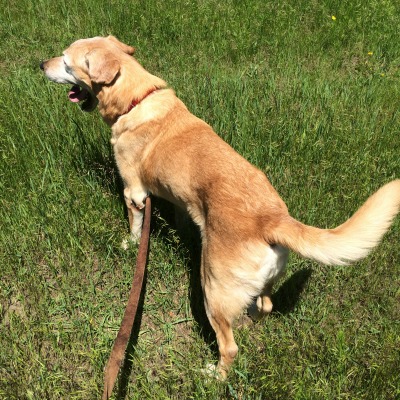 Stryker knows the commands sit, stay and will pace when he needs to potty. We had a few accidents the first few days but that's understandable. I crated him the first night, and he's had free roam ever since, sleeps through the night. He does not get up on furniture or the bed so we will let that be. He doesn't seem to mind laying at your feet, actually on your feet. 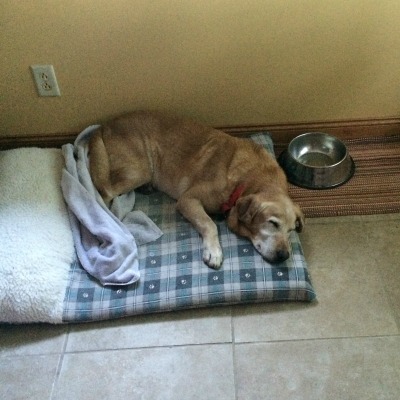 We visited the vet on May 29th and Stryker is a very healthy 54lbs. He has an ear infection but antibiotics and some ear meds should clear that right up. When he was taken in as a stray he was just under 50lbs so he's filling out nicely. He's had some hematoma's on his ears in the past so the ends of his ears are curled up just a bit. It helps to define the beautiful sweet dog that he is.