Welcome to RAGOM, sweet Sugar 14-334! She made the long trip from Pine Ridge, SD, along with 18 other lucky dogs and 2 kittens that went to several other rescues along the way! Big Golden hugs to 4 Luv of Dog Rescue for the transport and great work.

She is a Golden mix about 8 years old and is just the sweetest thing! It is clear she has been on her own for a very long time and needs a lot of TLC, but she is going to be so beautiful after spending some time living the Golden Life – especially so with winter on the way. She is believed to be spayed – which is uncommon for dogs from her situation. We also know she walks pretty well on a leash, doesn’t mind being in a crate, is good with my resident dogs, and will allow you to handle her, check her ears, mouth, etc. The picture is from en route; I will try to take a few better pictures of her sweet face tomorrow. 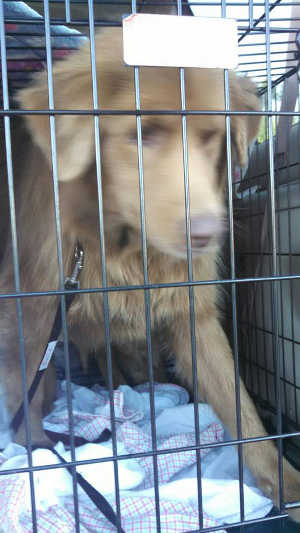 She will be hanging out with us here in Watertown, SD, until transport can be arranged to her permanent foster home. It has been a busy and stressful day for Sugar and we are just settled in. There was some concern because Sugar had not pooped or peed since being picked up yesterday and she had also been vomiting. According to the rescue transporters, it is not uncommon for people to throw food out the door to the dogs into the gravel driveway. The dogs are so hungry they just grab it up and swallow some of the gravel with the food...they have seen more than one dog blocked because the tummy was full of rocks.

Once we got her home, we were assessing her condition and giving her a little walk, and it was clear her tummy was very tender both to the touch and while she walked. Since she wasn’t interested in food or water either, after a few phone calls and e-mails between the vet and another RAGOM volunteer, we decided a visit to a vet would make everyone sleep better for the night. The good news – she is not blocked! But, she needed a shot for the nausea and tummy ache that was probably caused by her previous situation and stress, a Capstar for the fleas, some mild soft food, and a good lookover. If she is still here on Tuesday, she will see the vet for a more thorough exam. Since then, she has been able to relax, drink a little water, and eat a few bites of the food...which she will only eat off the floor! If you think about it – it makes sense that dog dishes were not part of her routine! We’re just going to take it nice and easy.

Her skin and coat are in terrible condition with clumps and sores. I cut some big clumps and matted hair off her tail that looked very uncomfortable (check out the pictures!) I am going to slowly work on some of the others over the next day or two so she doesn’t get too stressed again. This is the first time I have ever seen mats with trash wound in them...rags, plastic, metal! Some of this may need a professional groomer. 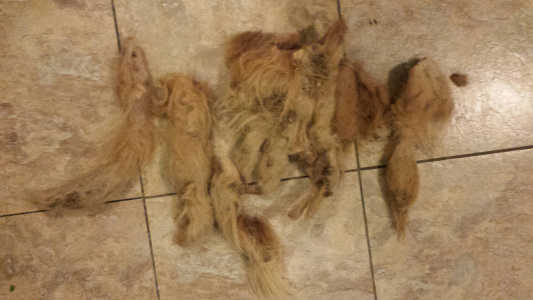 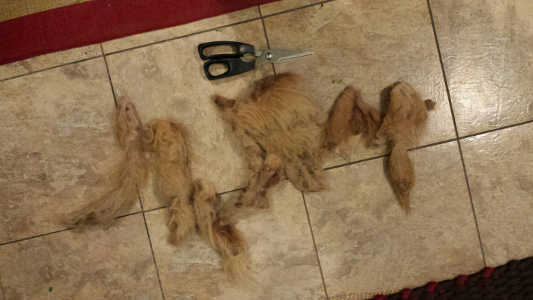 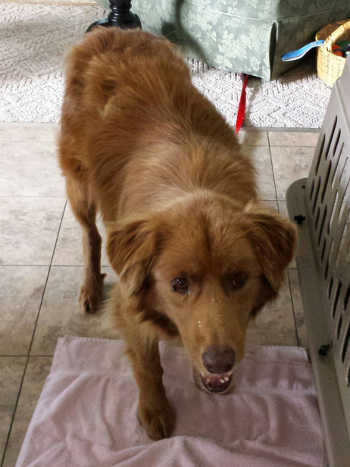 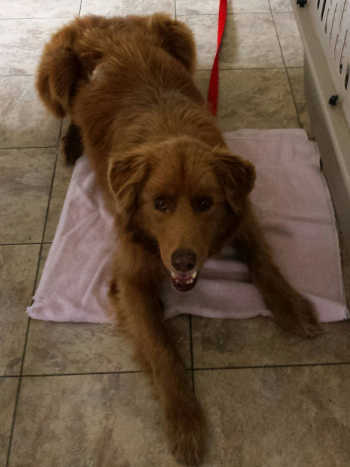 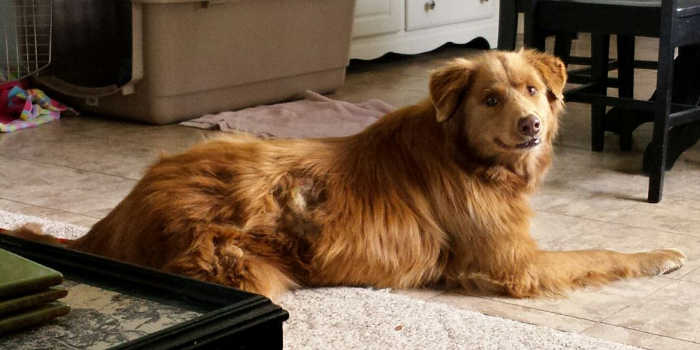