Rescued by a Golden
"In memory of Tieran - my Tank"

Happy Holidays, Tank, from the Chaudoirs!

Tank is a handsome male Golden Retriever who came into RAGOM from Leech Lake Reservation in northern Minnesota. His age is up for discussion; when he was surrendered we were told he was 8 years old, but the vet and my family both think that he’s younger based on his teeth and energy level. He is a deep red color with a big block head, and he weighs in around 70 lbs which is a good weight for him.   He is currently un-neutered, but that will be changing before he’s adopted!

Tank is a big sweetheart - he loves to be with people, and if you aren’t paying attention to him he’s not afraid to give you the ‘Golden nudge’ to let you know he’s there. He has been my shadow since we got him; everywhere I go I can bet on the fact that he’s right there behind me. His whole butt wiggles when he wags his tail (which is quite frequently!). He takes treats very gently, walks well on a leash unless he sees a squirrel, and already knows the commands “sit,” and “shake” with both paws. 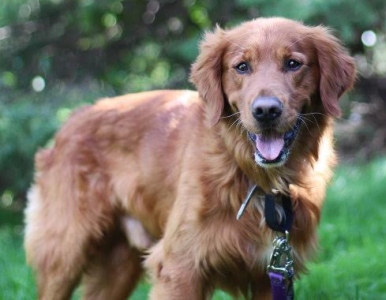 He has a fair amount of energy - he’s going to be a dog that needs some form of exercise every day, whether that be a walk, run, hike, swim, etc. He does have an off switch though; he loves to snuggle and will take naps and relax in the house.  When he first came to us he was very frantic (being uprooted from your family is hard), and his attempts to play with our dogs were too energetic/rough. With some training and time to settle in he is now doing a lot better and can hang out in the house with all three of our resident dogs.

At first, Tank was very interested in our cats. I’m pretty sure he had never seen them before he came here; he’d bark and pull excitedly whenever he saw them. We took time and did slow introductions after he had a few days to settle in here, and after a week he now gets along fine with our cats. 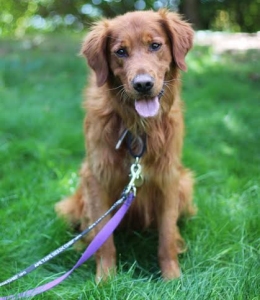 Another thing we’re helping Tank get used to is crates.  He was very frantic when crated the first few days, but we set up some extra crates around his and found out that if we crate our other dogs next to him he does much, much better.  We are slowly increasing the time he is left in the crate just so he is used it and doesn’t find it scary.

Tank is a typical Golden who loves to retrieve; he will fetch and bring the ball right back to you and drop it in your hands. He also will play with a tennis ball on his own if we’re busy; he’ll throw it up with his mouth and then go and get it. He loves stuffed toys but they will be shredded and de-stuffed pretty quickly after he gets them.   His tail is a weapon of mass destruction; it’s always wagging and if something is at his level it may get knocked over :) 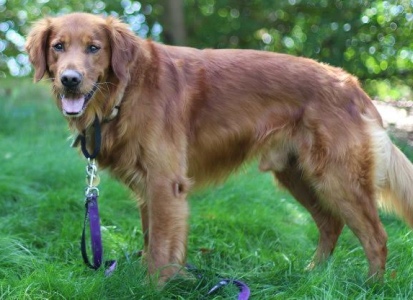 Tank came into RAGOM with a hip that had been broken a year ago.  The hip bone mended well, but X-rays showed that his femur bone is dislocated (not in the hip socket), and there is some arthritic growth on the femur and in the hip socket.  Tank doesn’t limp/show pain when walking, but he refuses to put full weight on the dislocated leg when his other back leg is lifted up. We are in contact with a vet specialist; she does not think Tank needs surgery and we are waiting for her to confirm that his reluctance to put full weight on that leg (when the other back leg is lifted) is not an issue.

What is the perfect home for Tank?

If you think Tank is the perfect dog for you, please contact your Placement advisor.