Tinsel is a 4-5 month old golden mix born in August. Tinsel came to RAGOM from another rescue in Iowa. She and her litter mates Glitter, Sparkle, Maggie and Ava were strays from the Winnebago Indian Reservation in Nebraska. Some of the litter are black/brown and look like they have more shepherd blood but Tinsel is mostly cream with a little light brown. She has beautiful coloring and a coat like a fleece lining. The vet thinks she will be 50-60 pounds. Currently, she is about 20 pounds—all fluff.

She is happy with people and likes to sit and snuggle and have her tummy and ears rubbed. She wants to play with the resident dogs. She likes toys especially chasing balls and chewing on antlers. She is riding in the car with us now and going out for our walks. She loves walks and is getting used to a leash.

Tinsel or Scout as we are calling her, will make someone a great watch dog. She alerts for things on the television, the mailman and has a funny little bark. Not much gets past her. Today as we watched a television show about a pet vet, she was excited by all the sounds coming from the television. She has also been keen to bark at her own reflection. I’m sure living in a house with so many new things is very exciting and a bit scary for her.

Tinsel has been good for several hours in her crate while I’ve been away. I have found gates less effective. In the crate the other dogs stay near her and that is calming. We are working on housetraining. She knows what to do outside when you say go potty. She has used the puppy pads a few times when I was away but we still have accidents. Remember, she has only been indoors a few days. She is smart and will get this quickly. I just had two foster puppies here so the carpet may be sending her miscues.

Tinsel probably has some herding dog in her bloodline. After a few days, she began playing with my resident golden, Bella. She nips at her legs and wants to play chase rather than wrestle. It’s funny to see this big dog play with a little one. They are enjoying being buddies. Gypsy, my ten year old puppy mill mama, is not too interested in playing with this pup.

Tinsel will not be available for a few weeks as we delay her spay and get her weight and health improved. She has typical puppy worms and kennel related illnesses that are being treated with medication for a couple weeks. She would probably be a great dog for an active family or person. She loves to run and play and will need exercise, stimulation and training. She could be an only dog but would love another playful young dog. As the pictures show, she is a beautiful dog and she has a winning, sweet temperament. If you’re interested in Tinsel, please contact your placement advisor. 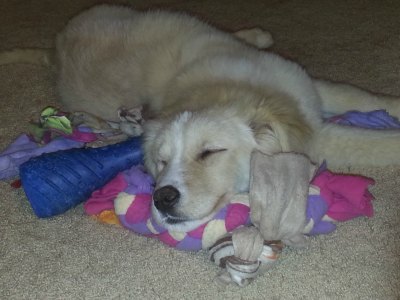 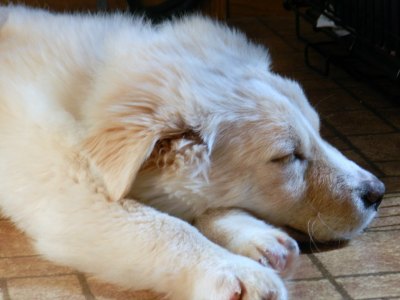 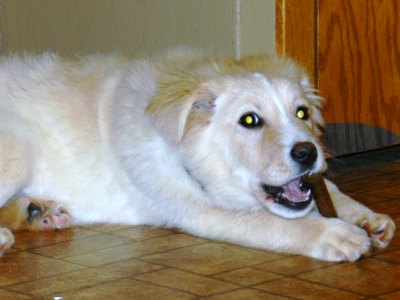 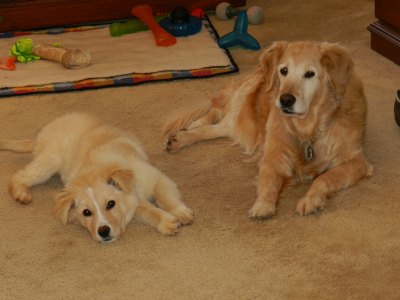