Have a wonderful Easter! Love CJ

Welcome Toby to the RAGOM family! We already have many nicknames for him, The Tob-ster, Tob-meister, Tob-Tob, and when he is in trouble (which is never), Tobias.

Toby is 11 years old, and came from a home where he was very loved. His owner was very sad to see him go, but he could not provide for what Toby needed, so he made the decision to surrender him to RAGOM, where he knew Toby would get the love and care he deserves.

Toby is a very good, happy boy, but unfortunately he does have some serious health issues.

First, and least concerning, Toby is almost completely deaf. It has been a good learning experience for his foster family having to figure out how to communicate with him. I think maybe he can hear some very loud noises, but for the most part, unless he can see you, he doesn’t know you are talking to him, or even that you are there. Some mornings, we get up, feed our resident dog, make coffee, and are halfway through breakfast before he even opens his eyes! (His kennel is right in the middle of the living room, and very near the kitchen, so if all that banging around doesn’t wake him, he MUST be hard of hearing!) When we are in the house, if he isn’t within arm’s reach, I can make him look at me by thumping on the floor. Luckily, he had lots of training when he was younger, and I think hand signals must have been part of that. If you beckon him, he will come to you immediately, and he responds to the “sit” and “stay” hand signals. These have been very useful! I have been leaving his leash on while we are in the backyard because unless he sees me, he doesn’t know I am calling him, so I like to be able to go grab his leash when it’s time to go inside. He sticks pretty close outside, and I don’t think he would take off even without a fence. He was raised as a hunting dog, so it is probably pretty ingrained in him to keep close to his people.

He has not been neutered yet, and won’t be until we get his health under control. He does not like the large intact German Shepherd that lives in the yard behind us, and he will lift his lip and snarl at him if he comes to the fence. We haven’t seen him have issues with any other dogs on walks, or at the vet or pet store. (Although I did notice some dogs seem to react to him… must be all the testosterone in him…) While Toby was with his temporary foster, it seemed he was very over-interested in other dogs, and would mount them if given a chance, but we haven’t seen any of this at our house. He does get in his foster sister’s face sometimes, but she will lift her lip at him, and he backs right off. For the most part though, he ignores her. He doesn’t have any food guarding tendencies, and will sit nicely right next to her to get a treat.

Probably the most serious of Toby’s issues is that he has heartworm. We are waiting for results from an Xray he had this last Saturday to determine how bad the worms are, and then a decision will be made regarding treatment. All of this testing, and the treatment that might be down the road for him is very expensive, so donations made to RAGOM in Toby’s name would be welcome!

Toby also has a softball sized mass in his abdomen, and we don’t know exactly what that is yet. The first order of business was dealing with the heartworm, so I should have more information on the mass in time.

Toby’s teeth are also terrible. They were the bottom of the vet’s list, since they have probably been bad for a long time, and they don’t seem to be painful for him. They are very worn down, and quite a few are broken. His vet said if he were to see a veterinary Dentist, they would probably say the vast majority of his teeth would need to be pulled, but that is certainly not at the top of the list right now! Surprisingly, though, he doesn’t have very bad breath like a lot of older Goldens do!

We are working on fattening him up right now. He is about 10 pounds under weight. He doesn’t have much of an appetite, which could be related to any of his numerous health issues. The vet did say it didn’t seem to be related to his teeth, as he doesn’t have any trouble chewing. His surrendering owner said Toby really likes people food, so he was probably fed quite a bit of that, and doesn’t like dog food as much. He has taken a liking to wet food, and I can usually get him to eat wet food mixed with a little dry, and I usually sweeten the deal a little with boiled chicken, or a little ground beef, or bread, which is his FAVORITE! He also likes to be hand fed, so I can get a little more in to him that way sometimes.

Things are up in the air for Toby right now, until we know more details about his problems, so keep your fingers crossed for this sweet boy! Hopefully we will have more updates soon! 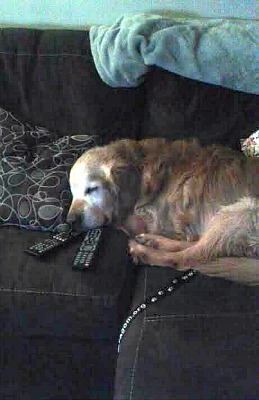 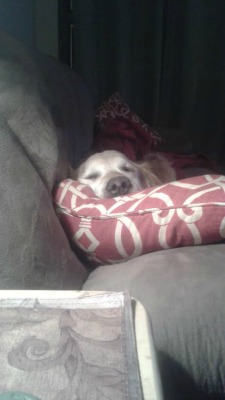