Let me introduce Trackr, a beautiful little black puppy who looks all the world like a lab, but is a Golden Retriever mix. He was found with two siblings, Moxie 14-304 and Kaiser 14-305 (if you look at Kaiser’s picture, you will see why we say he is a Golden mix), abandoned in Alabama. We had heard they were found in a parking lot, but I read on Kaiser’s page that it was a ditch. Whichever, they were lucky dogs to have been brought into RAGOM where they will be well cared for until they find their forever families.

Trackr is a lively, healthy puppy with a sweet disposition. He has a gorgeous, sleek and shiny black coat and beautiful floppy ears. He is about 13 weeks old. He is playful with people and other dogs. We have a couple of resident dogs, and our daughter’s dogs are over quite often. He loves to run around with them, and is happy to take a long nap afterwards. One of our dogs, a little Shih Tzu, is not very interested in playing with him. Benny will growl and air-snap at Trackr, and Trackr backs away appropriately. This is a good way for Trackr to learn dog boundaries.

Housebreaking is in progress. Some days no accidents, another day not so lucky. But he is doing a good job. He sleeps in a crate at night and keeps it clean. He will wake up Foster Dad if he needs to go out. During the day his clues aren’t so obvious and it is up to us to get him out on time. I guess it is we who need to work on it!

I, the foster Mom, work from home four days a week and am able to let him out every two or three hours. We have an exercise pen that is about 3 and a half feet tall. It has contained every pup we have ever put in there – but not Trackr! We were surprised the first time he got out, and thought maybe we had left a gap where two fence pieces come together. The next morning when I was working, he got out again. I examined the pen and found one area where you could lift one panel just a little bit. I figured it would have been very hard for him to get out there, but secured it a little better. But I was on the wrong track entirely. I put him back in, and he fussed for a while (as expected), then was quiet. I peeped down in the foyer where we had the pen set up, and there he was at the top of the fencing, front feet and head already over the top. Yikes! I rushed down to get him so he didn’t fall to the ceramic floor. But obviously that was how he had gotten out the other times, also. We are so lucky he didn’t get hurt – that is a big fall to a hard floor for anybody! (Maybe he should have been named Climbr) Well, I set up a nice size crate – not nearly as nice size as the pen would be for him – but he stays put there :-)  He fusses for a while, then gives up and manages very well.

By the way, we are not misspelling his name. The pups were found on the anniversary of 9-11, and they were named after some of the dog heroes who searched for survivors in the rubble, one of whom was named Trackr.

He got a clean bill of health from the vet and he is going in this Thursday (10/16)  to be neutered. After he has recovered from his surgery, he will be ready to go to his forever home. Are you hankering after a puppy? Don’t forget that puppies are a LOT of work. They need your time, training and patience as they learn to become a well-behaved dog. But of course, they are very rewarding as well. Please contact your placement advisor if you are interested in applying for Trackr. 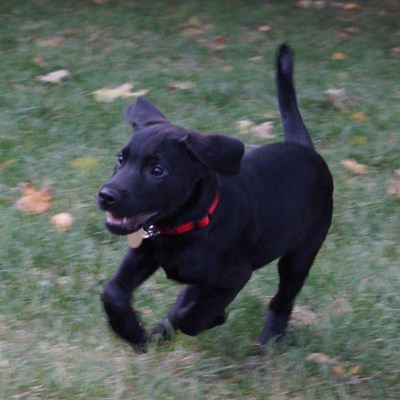 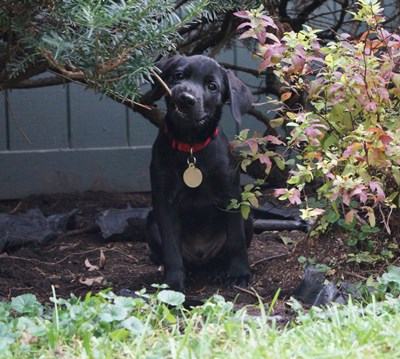 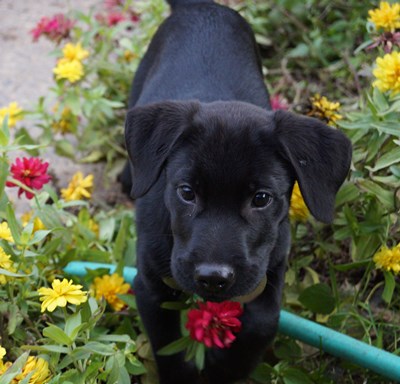