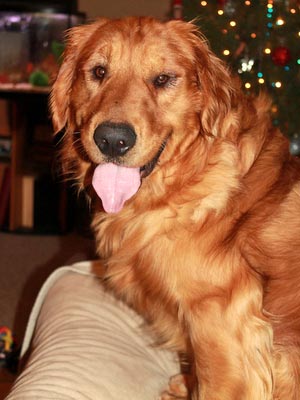 Vinnie, who will be 2 in January, is a gorgeous dark red PB Golden Retriever. He is 76 pounds, though his ideal is probably around 80 pounds. Vinnie was surrendered to RAGOM because his owner traveled for work and he wasn’t getting the attention he needed and because he needs medical attention for his hips and eyes. Vinnie was primarily an outdoor dog, but was allowed inside in the lower level of their home, so he does have some experience with being inside. All RAGOM dogs live indoors at their foster homes, so he is now enjoying being a spoiled, indoor dog!

So far, Vinnie has been introduced to my 8 year old daughter, our 18 month old resident Golden, foster brother, Rufus 12-342, and our two cats. He has done great with all of them! He does tend to pester the cats in an attempt to play, but he backs off a little when they swat him on the face. My cats are used to having fosters bother them, so they don’t get too upset by it. I was a little worried about having 2 intact male fosters, but there has been zero issues between them and I am keeping a close eye on them to make sure we don’t have any problems. Foster brother Rufus is on cage rest following heartworm treatment, so they haven’t been around each other without a cage separating them a lot yet. Vinnie is a very sweet boy that constantly wants to be with us. He needs some training, so I would recommend that his adoptive family take him to obedience training classes.

Vinnie has quite a few medical issues going on right now. We knew he was coming into RAGOM with hip dysplasia and possible eye entropion. While we haven’t gotten hip x-rays yet, it’s clear that he has some problems with them. His left eye has severe entropion, and his right eye has mild. We will be doing surgery on the left eye for sure when he is neutered, and we will monitor the right eye for signs of discomfort (excessive blinking, drainage) in the 2 weeks leading up to surgery to determine if his right eye needs corrected as well. Vinnie has ear infections in both ears which are being treated with a once daily ointment that he tolerates very well. Infections of the ear are pretty common in Golden Retrievers. Vinnie developed diarrhea in the first few days of being in his foster home, so he was switched to a bland chicken/rice food. Vinnie had several accidents in the first few days of being in our home. I was letting him out every few hours, but he was still peeing in his kennel. The urine appeared normal, so I just thought that maybe he wasn’t housebroken or crate trained. Two days after arriving, I brought him to work with me so we could go to the RAGOM vet in the afternoon. While kenneled at my work, he peed on the white blanket and it was very bloody. At the vet, a urinalysis confirmed that there was blood and infection in the urine. We will be doing 14 days of antibiotics to make sure the infection is cleared up before his neuter/eye entropion surgery. Vinnie was vaccinated at his vet appointment, his fecal sample showed no intestinal parasites, and his heartworm test was negative. We were happy to get some good news from the visit!

Vinnie is on an antibiotic for his uti, a probiotic for his diarrhea (which cleared up in a few days, and now he is back on his regular food), Mometamax for his ear infection, Rimadyl (an NSAID) for his hips, and tramadol for pain from his uti and hips. I am also giving him artificial tear drops to help soothe his eyes. Once his uti is cleared up and he’s had his neuter/eye surgery, we will take him off the tramadol pain med to see how he does on just the NSAID for his hips. We will be x-raying his hips when he is under for his neuter, and then we will send them off to the RAGOM surgeon to review to see if he needs surgery. Once we get his immediate medical needs taken care of, we will start Vinnie on a joint supplement. We will know more about the severity of his hip dysplasia and his long term need for an NSAID after the xrays are reviewed. He will benefit from being on a joint supplement for the rest of his life.

Vinnie won’t be available for adoption until after his neuter/eye entropion surgery and after we have the surgeon evaluate his x-rays to see if he needs surgery on his hips, but that doesn’t mean that he can’t have anyone interested in adopting him! We are still getting to know him and he isn’t feeling 100% himself with all his issues going on, but we think he’d be a fit with mostly any family. I don’t think he necessarily needs another dog in his adoptive family, and at this point, he might not need a fenced in yard once he knows his boundaries. This could change once he starts feeling better, but we’ll update on that if needed. If you are interested in learning more about Vinnie, please contact your placement advisor!

Vinnie’s vet bills are adding up fast, and he could really use a sponsor! RAGOM does a wonderful job taking in dogs with medical issues (both Vinnie and my other foster, Rufus 12-342, have medical needs and have had huge vet bills!). RAGOM is only able to help these dogs because of the many wonderful people who donate!