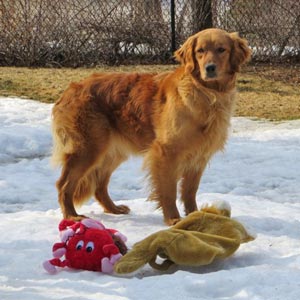 Zoey is a gorgeous purebred 2-year old female that came to RAGOM from a commercial breeding kennel. Zoey met the other six dogs in her foster home with no problems. However, it took her a few weeks to feel comfortable and there were some growls among all the girls for a few days. We have five females here which is similar to too many women in the kitchen where everyone thinks their way is the best way. Zoey and a couple of the females had to discuss who got the toys, especially the stuffed ones. She loves to surround herself with the stuffed toys and will then proceed to destuff them.

The first week Zoey was here, she was in season and we had to separate her from the two very interested, neutered males. With the high estrogen, the males and too many females, the house was a bit chaotic. To help Zoey acclimate, we kept her separate in a different room so she could relax and learn that no one was going to hurt her. Because of being in season, she has not yet had her spay surgery, and that is next on her to do list.

Zoey goes in and out the back door to the fenced in yard with no problem. At first, she was a bit hesitant, and can sometimes still need some coaxing to go out. She willingly comes back in --thank you Zoey. This may not seem like a huge thing, but when you have spent many hours trying to catch other puppy mill dogs in your backyard, it's a present to foster mom that Zoey happily comes back in the house. She's doing really well on her housetraining. We've only had one or two accidents when we didn't watch her outside to make sure she did her business before coming back in. She runs outside, picks up a toy and sometimes forgets what her goal is. Today my little Shiba Inu took off running and Zoey ran and chased with her all over the backyard. She looked so happy and it is so fun to watch her.

Zoey is very gentle with humans, is very treat motivated and will come up to us for treats. She also gets envious when she sees the other dogs being petted and doesn't want to be left out so will come right up to you to be petted too. Zoey will need another dog in her house to help show her the ropes, no young kids because they are too noisy and would scare her and a physical fence. Now that the weather is warming up, we are going to try going for some walks and see how she does. If your home fits the description and you would like to meet Zoey, please let your placement advisor know of your interest.

More to come as we get to know Zoey better. 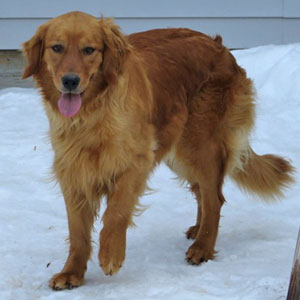